This is the third book in the Georgia B&B series by Anna Gerard who cozy fans also know as Diane A.S. Stuckart and Ali Brandon. I’ve loved this series since it first came out a couple years ago, and it just keeps getting better. Nina and her housemate Harry have grown a lot in how they treat one another and may be developing more than just tolerance and tossing around fun-loving insults at each other. I’m really excited to see what the next book will bring! At one point toward the end, I was a little sad, but the next chapter fixed that right up! You’ll see when you read it, and as my review below suggests, maybe a few tissues for those happy tears would come in handy!

Peaches and Schemes by Anna Gerard
My rating: 5 of 5 stars

I think I love this book the best so far in the series! I never in a million years thought I’d come to love Harry’s character so much when I first met him in book one. But he went above and beyond to prove that maybe sometimes he’s really got a good heart that’s not scheming something.

Harry happened to be back staying at the B&B, and Nina was surprised to run into him at a trade show. I had to laugh at his new venture, a hired plus one. And boy did he get in over his head with his first and only job! Nina’s friend was murdered at a wedding expo fashion show, and she was going to stop at nothing to bring her justice and also prove that an older lady who was the woman’s biz partner wasn’t a killer. Nina was worried about a stalker being the killer and was trying to avoid a certain car. The dead woman’s dog Gus was so darn sweet, I was hoping Nina would get to keep him, since he was already Mattie’s playdate buddy. But Gus did get a good ending.

This showdown was absolutely epic and kind of typically Harry. But it took all the ingenuity of the parties involved to pull it off successfully. Luckily, it worked out and two people got a surprise happily ever after, while two more people were starting to realize something good. What a sweet and fitting ending! Have a few tissues handy for the happy kind of eye-leakage!

This is the second hilarious book in the Red Herring Mysteries series by Dana Dratch. Some of the things that Alex and her brother Nick get into are just so funny, and I can easily picture this as a comedy-mystery on TV. I love this writer’s style too, just the wording of some things or descriptions make me chuckle. I can’t wait for the next book!

Oh my goodness, I think this one was even better than the first one. There were several mysteries going on all at once, some disappearing bodies and a possible art theft. Not to mention that a baby had mysteriously appeared in Alex’s house. Her brother took to the baby immediately which had her wondering if it was his. Then a guy she was working with at the newspaper claimed that his niece was out to kill him and like before, Alex ended up with a houseful of guests, including the one-of-a-kind Baba, her Russian grandmother, who was more than welcome this time, since the baby loved her and now he would actually stop crying.

This was a pretty exciting mystery and not everyone was who they seemed to be. Alex even got that impression about her own father who had gone on a business trip ten years ago and died of a heart attack. Now her charming British neighbor who owned the B&B across the street was giving her cause not to quite trust him. Her brother Nick’s bakery business was booming though. These are definitely some unforgettable characters, and I’m so glad I found this series. The main mysteries were cleared up, but we were left with a couple of things to think about. Then after reading the preview included for the next book “Red Hot”, that’s making me seriously anxious for when it comes out. 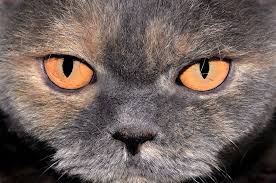 This is the third hilarious and fun book in the Poppy McAllister series by author Libby Klein. I just love her sense of humor that she puts into all these books. It’s so refreshing, and even the cat Figaro gets to be in on some of the mischief and crazy happenings. My favorite character is Aunt Ginny, and she sure didn’t disappoint this time. She was at all the filmings of Restaurant Week with her crew of senior friends. I had to chuckle at them running bets on who would do what, since the whole week was very drama-filled. I can’t wait till the fourth book comes out!

The cat in the picture made me think of Figaro, although I always thought he was darker gray. I couldn’t resist adding it due to the orange eyes.

I think this may be the funniest in this series yet! Despite the murders or any attempts at murder, there is still always plenty to laugh at. Aunt Ginny is such a hoot when she decides to wear one of her what seems like endless crazy outfits. This time I couldn’t stop laughing at Figaro, that little stinker cat! He just seemed to know that someone was allergic to him and kept mysteriously showing up in their room. I loved how he drew Poppy into his mischief too! He did something fairly important later on in the book–won’t spoil that, but it was pretty cool.

When one of the judges for the Restaurant Week competition was murdered, Poppy worried that she’d be in jail before the day was over, since it was her dessert that the judge was eating. Not to mention the headache of having to work alongside Gigi, a chef who had her own restaurant but was a little too cozy with Tim, Poppy’s ex-boyfriend that she herself seemed to be getting closer with. All the chefs had some sort of secret, so there was no shortage of suspects in the murder, sabotages and attempted murders that followed. In the end, Poppy overcame her quandary about whether Tim or Gia would be the guy she chose, but there was still a tiny little issue which I won’t mention, since I don’t want to spoil it.

I had guessed the killer randomly, but I had no idea of the reasoning and the story behind their why. The showdown was pretty awesome showing once more that a good chef can even handle a killer if the right equipment is available! I am more anxious than ever for the next book because of how this one ended. It’s not really a cliffhanger, since the murder was solved. Just read it and see if you agree!