This is the third book in the Callie’s Kitchen series. Now I’m caught up and anxiously waiting for book 4! These characters are just so awesome!

Secrets and Pies by Jenny Kales

I really loved this latest book in the series! Callie and Ian are in a good place with their relationship, Callie’s pretty much come to terms with her ex and his new wife living a couple blocks away and once again, you can see just what awesome family ties there are in this series, not only with actual family but employees as well.

It was summer in Crystal Bay and business was booming for Callie’s Kitchen. Callie was involved making tons of food for the annual Greek Fest as well as handling concessions that her grandma Viv got her involved in for the Chamber of Commerce’s Beats by the Bay, a summer concert series. When Callie found a friend dead at an old house, she was devastated as was Olivia who made her mom promise to find the killer. This time Callie got Max to help her do some investigating which was almost as funny as when she went with her grandma in the first book. Max was having some personal issues and had to give Callie some bad news. George came in to help with the huge amounts of customers they’d been getting. Callie’s investigating nearly got her killed (again) but thanks to long-ago bootleggers she got the situation well in hand! The showdown with the killer was tense for awhile though! I had definitely not seen that person coming.

Everything worked out great, the ending was wrapped up nicely and Callie got a very nice surprise as well. I’ll leave it at that and you’ll just have to read it to find out! 😉 I’m so anxious for the next book to come out! I’ve really grown close to all these characters, who could not love George, the old teddy bear, who loves his daughter and granddaughter like crazy. His relationship started in the previous book seemed to be going well and I was glad everyone was on board with that. Sweetie was mentioned but I’m still hoping she pops up in another book (see book two if you don’t know who Sweetie is) I had to leave Crystal Bay pretty reluctantly knowing there isn’t yet a book to follow but I am sure there will be, hopefully soon. 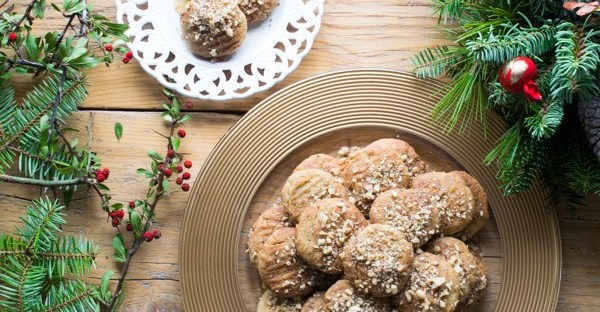 This is the second book in the Callie’s Kitchen cozy mystery series by Jenny Kales. I had read the first one back in April and decided it was time to visit Crystal Bay again even though it was Christmas there. The characters were so memorable that I had no problem remembering things about them from the first book.

Spiced and Iced by Jenny Kales

I loved this Christmas themed mystery, maybe even more since where I live it’s warm and sunny today and looking outside, I don’t have to see snow lol. I enjoy Christmas themes anyway and reading about it in this awesome Greek family was just a lot of fun. The first book was set a few months before this one and since then, Callie had started seeing the police detective, Ian Sands. Her dad got a new love interest in this story which was interesting and comical at times.

Callie was supplying the cookies for a bridal shower held at the local English Country Inn. The events planner had arranged for her to do that but Callie didn’t have to worry about staying and serving. Later when Callie found that her colleague had been murdered, of course her dad and Ian were worried for her safety and she was actually worried too. It didn’t stop her from wanting to get to the bottom of things. During her investigation, she found a couple of secrets about other inn employees as well. It was pretty funny reading how her Grandma Viv and her cousin/aunt from Greece known as Sweetie had tried to snoop into the case as well. Callie worried about their safety, but as Max said, Viv could probably give Jessica Fletcher some pointers.

Callie’s ex-husband and his new wife, Hugh and Raine are a small part of this book. I like that Callie has been able to deal with their marriage but she was having some issues with them coming to Crystal Bay to live even though she realized that Olivia would love having her dad live close by. Everything worked out in the end, which by the way, was pretty epic since Callie got to chase someone down with a snowplow. I can somehow picture that happening in a mystery on TV.

I still just love the character of Grandma Viv. She’s just everything a family would want in a grandma. She’s got their best interests and safety at heart without thinking about her own. And Sweetie was a hoot too! She enjoyed coming to Wisconsin for a real white Christmas but was glad to be returning to Greece by New Year’s since she missed the warm weather. It would be fun if she turned up in another book. I can see her with Viv doing more investigating for Callie lol.

I’ll be moving on to the third book soon! I really enjoy this series and also the yummy recipes found at the end of the book!