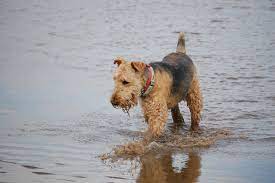 This is the third book in the Jazz Ramsey series by author Kylie Logan who’s written League of Literary Ladies, Button Box Mysteries, Ethnic Eats and Chili Cook-Off under this pen name. Her Constance Laux GR profile lists some other names you’ll find series under as well. I’ve read the first in the Button Box series and the first three in the League of Literary Ladies and I do enjoy her writing. I hope Jazz Ramsey continues on, because I really enjoy those key characters.

A Trail of Lies: A Mystery by Kylie Logan
My rating: 5 of 5 stars

I’m really enjoying this series, and this third book definitely didn’t disappoint. I love that Jazz and Nick have grown closer since the last book. Sweet Airedale pup Wally isn’t completely HRD trained, but he’s getting there. It was good to see Gus the Lab come out of retirement for a little bit to help out.

Readers got to know Nick’s mom Kim a little better in this book along with her backstory. She wasn’t a terrible person, but she didn’t do right by her son when he was little, although I think she finally came to realize it by the end of the book. There were a couple of surprise reveals in the story, and wow what a showdown. I had definitely not suspected whodunit, at least not until Jazz realized, then it made sense. The very ending was really good too and was emphasizing family.

This is the second book in a newer series by Kylie Logan called Jazz Ramsey featuring a woman who works for probably the coolest nun on the planet at an exclusive all-girls’ school. Jazz’s passion is training cadaver detecting dogs, and as of the last book, she had gotten a new puppy from Nick, a detective that I hope she gets back together with. Puppy Wally isn’t quite trained, but his older and wiser friend Gus sniffed out a surprise in the abandoned floor of the school toward the end of the school year.

The Secrets of Bones by Kylie Logan

I had really enjoyed the first book in this series and when I got a chance to read and review the second, I jumped on it. I could hardly put this book down. It wasn’t so much that there were exciting actions, but I just wanted to know what was happening. I had my own theory, and part of it was right, but wow what a surprise twist toward the end! I can’t really say too much or risk giving away spoilers.

Once again, I found that I really liked the character of Sister Eileen known simply as Eileen in the book. She was the nicest and coolest nun but a firm leader at the all-girls’ school that she ran. Jazz had borrowed a retired cadaver dog to demonstrate how they found things like a tooth or a bone, things that she’d hidden. But imagine her surprise when Gus found something that she hadn’t hidden! I’m really looking forward to more books in this series!

This was the first book in the Creature Comforts series by Arlene Kay who is no stranger to writing regular mysteries. I would call this a cozy with some edge to it, but I still enjoyed it. Babette, Perri’s friend was such a hoot! I meant to add her to my other review, but I can’t go without mentioning her. She’s super rich (she’s a three-time widow and divorced once), loves nice clothes and amenities (hence a huge motor home with all the comforts of an actual home) she’s very sweet and loving to Ella, Perri’s guy’s little girl, loves her dog to the moon and back. In other words, I would definitely want to be friends with her. She seemed very loyal to the people and dogs in her life.

This was an awesome start for a new series, a well-plotted and well-written book, lots of intrigue and a nail-biting showdown too! I like that the jobs of the main character and her boyfriend were different than usual. Perri was a leathersmith who sold high-end dog collars, leads mainly to rich dog show clientele via the dog show circuit, and she was formerly an Army sergeant. I thought that part was especially cool! And her two dogs had the Schutzhund training–after reading about it in another cozy, it sounds like the perfect thing for a mystery main character to have, dogs trained in that method. Perri’s main squeeze as she calls him was Wing Pruett, a well-known investigative journal who was very popular with the ladies, although Perri knew he only had eyes for her now. Ella was his adorable 7-year-old daughter who was learning about dog showing by raising her Pointer, Guinnie.

There were quite a few good suspects and at one point I had absolutely no idea who the killer was, but one small clue pointed me in the right direction, then another clue. The showdown was a little nerve-wracking, but as always, the perp went down. I guess one thing this book was pointing out was that there is almost always a shady underbelly to even a family-friendly event like a dog show. Everyone there had their share of secrets. I won’t say who, but there was one person I was especially relieved was not the killer. You’ll know when you read it! There’s a chapter preview of the next book which looks like it’ll focus on horses instead of dogs.

This is the fifteenth book in the Scrapbooking Mysteries series by Laura Childs, who has been joined by Terrie Farley Moran in writing the last several of these books. I thought this book was able to stand on its own, and I felt very much like I knew Carmela and her best friend Ava by the end of the book. I do want to start the series from the beginning, but as I said in my review, I couldn’t resist the lure of a brand new book looking at me from the library shelf. 😉

I have to admit, this brand new shiny book at the library drew me in, even though I hadn’t read any previous books in this series, but now I definitely want to start reading the rest of the series. If this book alone is any indication, this seems like a really fun series. I just love the banter and bad puns that go back and forth between besties Carmela and Ava. There were some good laugh out loud moments, even during the showdown. I just love Carmela and her take-no-crap attitude…and her sarcasm, lol.

I was a little confused at times with all the business dealings going on in the book, but as I read I was understanding it a little better. I never figured out who the killer was, and that was one very cool showdown, wait till you read about it! There’s a lot I could comment on, but I don’t want to spoil any of the good stuff. I’m just happy I got this initiation into the Scrapbooking series, and now I’m looking forward to reading from the beginning and seeing how the Carmela/Edgar romance got started. They are pretty adorable!