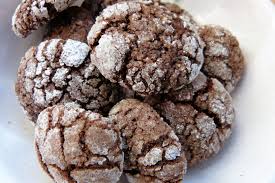 This is the fourth in the Death by Chocolate series by Sarah Graves. A lot of people have had the fun of knowing Jake and Ellie’s characters from the Home Repair is Homicide series, but I only just started reading about them when this series came out. I keep saying I want to start on that other series sometime…then sometime always gets filled up! I do enjoy this series a lot and didn’t really feel like I’d missed out when I first started it, but there were a few things I remember being implied or carried over from the other series although nothing major.

Death by Chocolate Snickerdoodle by Sarah Graves
My rating: 5 of 5 stars

It’s always a fun and suspense-filled roller coaster ride when Jake and Ellie are on a case! I’m always sitting there reading as fast as I can as they get into one investigating scrape after the other, but most of the time they get away without being seen. Although their friend and police officer Bob’s watchful eyeballs usually do see them or had a report of them doing something, and they have to answer to his lecture later. At least he’s never gone through with his arrest threat…yet lol.

I know who I desperately wanted to be the killer, but things don’t usually work that way. At least I had the real killer in my radar. The showdown was quite the hair-raising experience for the girls, followed by everything being explained with a nice wrapped-up ending.

I liked that they addressed Mika’s issues after having her second child. I’ve heard it ‘s a very real thing to have brain fog trying to take care of a toddler and an infant. The solution couldn’t have been better though, and it helped several people by ending up that way. I liked Helen and Anna’s side story too, and that ended well for all involved. I’m always looking forward to the next book and what adventure one of my favorite bestie sleuth pairs will get into next!