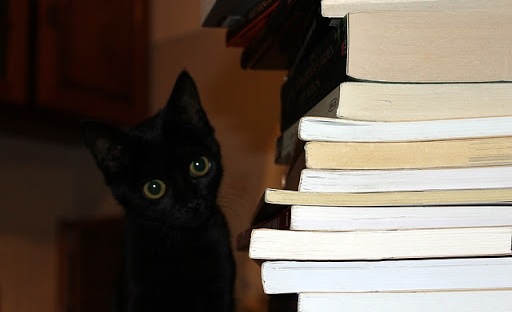 This is the first book in a new series, Witch Way Librarian, by Angela M. Sanders, and I absolutely loved it! The characters are fun, Josie has some mad witchy skills she wasn’t quite aware of until later, and the cat Rodney is an awesome friend for Josie. I was so happy to see on Amazon that the next book comes out in August. That’s a lot better than having to wait a year, but it’s still going to be hard waiting!

Bait and Witch by Angela M. Sanders
My rating: 5 of 5 stars

This book was so good that there were some spots where I couldn’t even put it down! I really liked the key players a lot and feel like Josie, Roz and Darla will become good friends. Rodney was such an awesome cat, and Josie’s powers that she discovered were pretty cool too. I loved what she could do using Rodney’s body to get the job done–it came in really handy saving someone’s life eventually.

At one point there was a random clue that made me start suspecting whodunit, and I was right, but I had no idea about all the reasons involved. The parts toward the end were suspenseful and the showdown was pretty nail biting since it somewhat followed a vision that Josie’s mom had told her she’d had of her, but with her good cat friend and assorted human friends, Josie made it through and caught the real killer. I really loved the ending, and now I’m going to have trouble waiting patiently for the next book.

I voluntarily read and reviewed an ARC of this book provided by the publisher, and my opinions are my own.